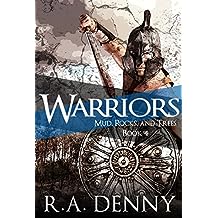 Let the battle begin! The vast Tzoladian army clashes with the Karsonian confederation in the valley of Mt. Sarmos. But the stakes are higher than a mere fight for power between countries. As the cruel emperor intensifies his persecution of the “subhumans,” the three chosen youths make tough choices that will decide the fate of the world.

Amanki is a soldier fighting for an empire that wants him dead. After losing her freedom and her seal, Brina faces the ruthless leader of the Sparaggi tribes. Tuka is surrounded by intrigue. Plots of assassination abound.

Thrown into circumstances they never would have chosen or even imagined, the teens must adapt or die. Have they forgotten their true mission?

R.A. DENNY  loves adventure, animals and history. She has travelled to the ancient rock city of Petra on horsebackby day, she escaped by night to create the fantasy world of her Mud, Rocks, and Trees series.
R.A. Denny, flown through the jungles of Costa Rica on zip lines and visited the Great Pyramid on a camel. She lives in Delaware. As a child, she had two pet flying squirrels.


MY  THOUGHTS
The battle is NOW!  First off, Ms. Denny adds to the story by putting in maps and a glossary.  That helps put the scenes into vision and the glossary helps you to understand the terms in the book that may be unfamiliar.   To begin with we get an overall picture of what has happened so far in the series.   This isn't just a power struggle.  It is much more.   We have young people, three to be exact, who have to make decisions well beyond their years.    These are important decisions.  The world's future lies in their hands.  These young people have to either fight and learn or they will die.   This isn't what they wanted but this is what they have.  They must deal or die.   I liked that there were decisions to be made for problems presented and you, the reader are left to make those decisions along with the young people.   What would you really do if this fantasy world were real and you were there.  Could you decide and step up or would you perish?   If you haven't read the first three books of the series  it will take a bit of time to get used to the names and places.  This is a realistic fantasy (if you let your imagination go) that you can be a part of.   A part of to defend the world's future. I would definitely recommend starting with Book One of the series and after this fourth book, continue on to the next two books.   It's a fantasy world you won't want to miss and an adventure like no other, from a talented and imaginative author.


I received a copy of this book from the author and voluntarily decided to review it.