A KEY IN A DEAD RAT'S MOUTH?

Andy Crowl barely knew his recently deceased cousin, Craig Moore, so he’s especially surprised to be named as the sole beneficiary in Craig’s will. Not that there’s much to inherit: just an empty bank account and a run-down house.
Once Andy arrives in the town of Mortom, however, he’s drawn into his puzzle-obsessed cousin’s true legacy: a twisted and ominous treasure hunt. Beckoned by macabre clues of dead rats and cemetery keys, Andy jumps into the game, hoping to discover untold wealth. But unsavory secrets—and unanswered questions about Craig’s untimely demise—arise at every turn, leading Andy to wonder if he’s playing the game…or if the game is playing him.

Something’s rotten in Mortom. And this dead man’s game might not be all that Andy is doomed to lose.

Erik Therme has thrashed in garage bands, inadvertently harbored runaways, and met Darth Vader. When he’s not at his computer, he can be found cheering for his youngest daughter’s volleyball team, or watching horror movies with his seventeen-year-old. He currently resides in Iowa City, Iowa—one of only twenty places in the world UNESCO has certified as a City of Literature. 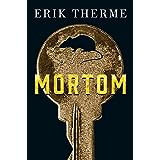 MY THOUGHTS
Craig  Moore and Andy Crowl are cousins but don't have much contact. So when Andy is named sole beneficiary of Craig's will, he is very surprised.  Craig didn't have much.  He lived in an old run down house that was in dire need of attention.  Craig also didn't have any money, but he did have a bank account.   It was empty. Andy  doesn't think much about it all until he goes to the town of Mortom to check out the house.
I loved the way the author starts the reader out thinking this isn't much.  Just a run down house and no money.  Then as you turn the pages, the web starts to form.   The author starts to weave that web and your mind starts to form questions.    Then on top of the web the twists and turns start.   When Andy arrived in the small town of Mortom, it doesn't take long for him to realize this was some sick kind of game.  Was it his cousins doing or was there something more here?  The author doesn't just give you Andy and Craig, but introduces new characters as the story goes on. There were times I thought I had this figured out. This was an easy one.   I was wrong.  The author didn't give the reader time to get bored.  You're in suspense and your interest is at top peak.   The author gives you rather vivid descriptions of the surroundings.  I was quite intrigued when a key was found in the cousin's house.  Under normal circumstances this wouldn't have been anything out of the normal. Just a key.  No it wasn't, the key was found in the mouth of a dead rat.  Then the hunt is on.  A scavenger hunt that is.    Clues have been left and Andy is in the game immediately.  Sometimes things are best laid to rest and not delved into. Does Andy begin to realize this.  I really rather doubt it but we'll see.  This author, being new, doesn't write like a new author.   This is an exceptional start to a great mystery.   Andy wasn't exactly my favorite type of character but I believe he fit the part perfectly.  I'm not sure if this book could be a real life situation or not.  There's always the possibility that something like this could happen. Couldn't it?  The book is extremely fast paced and a lot of plots and sub plots, sometimes a few too many.  I got a little confused at times. SO much going on all over the place.  I do wish a few of them had been taken out but I found it still an exceptional read, especially for the first book of an author.  So what was the key to that was in the dead rat's mouth?   What was at the end of the scavenger hunt?   Was the cousin's death a normal death or was there something sinister going on?   Or maybe, just maybe, Craig had this planned before he died.  A revenge motive?   I'll leave you there for you to grab a copy of the book.  Go on the scavenger hunt of your life with dead rats and cemetery keys.


I received a complimentary copy of this book from the author and voluntarily decided to review it.

In my opinion this in a 4 STAR book.

Thanks so much for taking the time to read and review Mortom, Gayle!