THE SHADOW YEAR by Hannah Richell 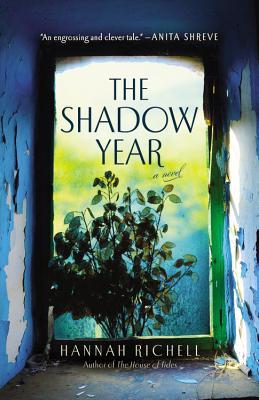 FIVE FRIENDS,
AN ABANDONED HOUSE.
A SECRET THEY CAN'T BURY.
^^^^^^^^^^^^^^^^^^^^^^^^
Still grieving the death of her prematurely delivered infant, Lila finds a welcome distraction in renovating a country house she's recently inherited. Surrounded by blueprints and plaster dust, though, she finds herself drawn into the story of a group of idealistic university grads from thirty years before, who'd thrown off the shackles of bourgeois city life to claim the cottage and rely only on each other on the land. But utopia-building can be fraught with unexpected peril, and when the fate of the group is left eerily unclear, Lila turns her attention to untangling a web of secrets to uncover the shocking truth of what happened that fateful year, in order to come to terms with her own loss and build a new future for herself.

Suspenseful and moving, with a deep secret at its heart, THE SHADOW YEAR is Hannah Richell's breakout book.

SETTING: Summer 1980, English countryside.  Five friends come across a lakeside cottage deep in the country that has been abandoned.  This is an escape for Kat and  her friends.  A chance to disappear for a while, offering lazy summer days laying by the lake and winter nights sitting by the fire.
Things will never be the same as an unexpected visitor arrives at their door.
SETTING:  3 Decades later.   Lila's marriage is in  trouble.  She goes to the same cottage and finds peace in renovating it.  She begins to wonder about who had lived there before.  She wonders how they managed to get along when in such isolated conditions.  They had left without taking their belongings. WHY?  But worse than that, she has this feeling that she's being watched.
I thought the author began the book with a good setting of what was to become.   She put together a story with everythigng you could want, lies, secrets, tragedy and betrayal.   The author wrote a tale of the dark and light sides of the human being and the relationships that they encountered.  The past is not only the past but has a profound effect on the future.  Something that we can't escape. The author wrote a wonderful story of weaving the past with the present and giving us an ending that can't be forgotten. There are twists and turns on every page which keeps the reader's interest.  The web is woven tight and then it slowly unravels.
I would recommend this book to anyone who loves, mystery, past to present, and a good entertaining read.
Grab a copy and decide for yourself.  I don't believe you'll be disappointed.

I was given a complimentary copy of THE SHADOW YEAR by Hannah Richell from NightOwlReviews for my view of the book.  No other compensation took place.