What Seventy-Three Chimpanzees Taught Me About Life, Love, and Connection. 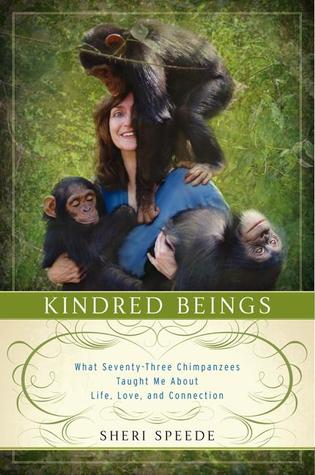 As a child, Sheri Speede knew that she wanted to advocate for animals in any way she could. But it was not until many years after veterinary school, when she was transporting a chimpanzee named Pierre away from a biomedical facility as part of her job as a conservation advocate in Cameroon, that Dr. Speede discovered her true calling. She began to search for land for a forest sanctuary for captive chimpanzees that were held on chains and in small cages at local hotels.

Dr. Speede eventually founded the Sanaga-Yong Chimpanzee Rescue Center, a forested home for orphans of the illegal ape meat trade. One chimpanzee, Dorothy, was rescued by Dr. Speede and her colleagues from a bleak existence imprisoned on a chain and forged a deep friendship with her. Dr. Speede explains how chimpanzees, like humans, are capable of a broad spectrum of emotional behaviors--both hateful and loving. Dr. Speede also candidly reveals her own struggles as a stranger in a foreign culture trying to adjust to rural African village life. And she admits that unlike Dorothy, she was not always kind, gentle, and forgiving.

Dorothy died of old age at the sanctuary, and a photograph of Dorothy's funeral, in which Dr. Speede cradled Dorothy's head while her family of chimpanzees mournfully viewed her body, went viral after being published in National Geographic. The world was surprised at the depth of the chimps' grief at the loss of their friend, but Dr. Speede was not. Through the chimps, she had come to understand the meaning of love, loyalty, and true connection.

While this is a compelling story about the emotional complexity of the chimpanzees she rescued and befriended, it is also Dr. Speede's story. Major events in her personal life, including love affairs, dangerous run-ins with criminals, and the birth of her daughter, unfold as the development of her primate rescue center runs parallel to her own development. Ultimately, Kindred Beings is a story of profound resilience, of both the apes and the woman who loved them

REVIEW
Once I started to read page one, I was so interested, I couldn't put it down.  I love monkeys, so I felt this would be a really good book, and I was right.  Monkeys, chimps, apes, they are all so fascinating. I'm sure if you read this book you will find yourself enriched by the author's experiences with chimpanzees.  She has so much generosity in her heart that she fights for the prevention of the extinction of the Great Apes.Almost from the beginning, Sheri Speede succeeds in her vision to save several adult chimps and babies that were living in horrid conditions.  She was the founder of an incredible sanctuary for these chimps whose mothers were captured for the bush meat trade.  How horrible to think that these babies had no one until Ms. Speede unselfishly stepped in.The book makes you feel that you want to fight the fight too. Even though, the book has a gentleness about it it  has such great power.
Dr. Sheri Speede has a veterinarian practice in Louisiana since 1985 and then moved to Portland, Oregon where she eventually sold her practice.  She followed her passion for animal activism to Cameroon where from 1998 to 2001 she worked with the Cameroon Government to establish the Sanaga-Yong Chimpanzee Rescue Center. She established and led several conservation programs to save chimps and gorillas from extinction. To me, she was selfless,  she cared about her work with a passion that most people never feel.  As you read the book, you feel like you are watching it all take place, as though you are there. As you read you could see the devotion and love that the chimps had for her in return for the love she had for them. the book is uplifting and heartwarming. I contains some wonderful colored pictures.  All in all it is a beautiful book by a beautiful woman Everyone should read this book. A story of love and devotion one woman had to save the chimpanzees from distinction.

I would give this book 5 STARS.

I was given a complimentary copy of KINDRED BEINGS from the author, Sheri Speede, for my  honest opinion of this book.

Sherri Speede qualified as a Doctor of Veterinary Medicine at Louisiana State University and began practicing in 1985. Moving to the Portland, Oregon area in 1988, she soon became a partner in Pacific Veterinary Hospital, a successful southwest Portland practice. She sold her interest in the veterinary practice in 1995 so she could commit herself full time to animal activism.

Dr. Speede lived in Cameroon full-time from 1998 to late 2011. During this time, she collaborated with the Cameroon Government to found the Sanaga-Yong Chimpanzee Rescue Center, a forested home for orphans of the illegal ape meat trade, while she led conservation programs aimed at saving chimpanzees and gorillas from extinction. With Edmund Stone, she established In Defense of Animals - Africa (IDA-Africa) as the U.S. base of support for the work in Cameroon. Currently, splitting her time between Cameroon and the United States, she serves as Director of IDA-Africa and Sanaga-Yong Chimpanzee Rescue Center.

I really appreciate your positive review of Kindred Beings. Thank you for taking the time to review it.

All my best,
Sheri Speede